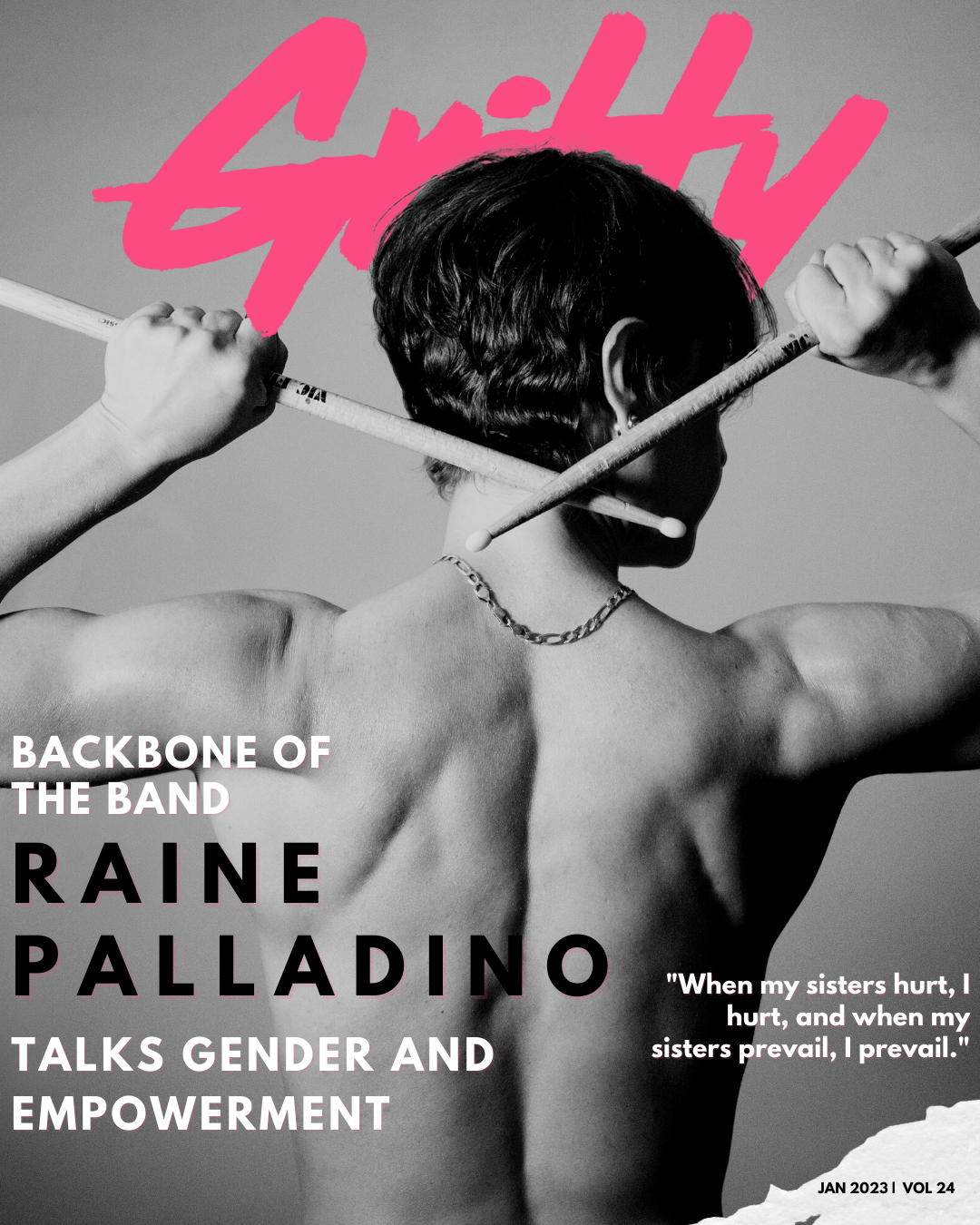 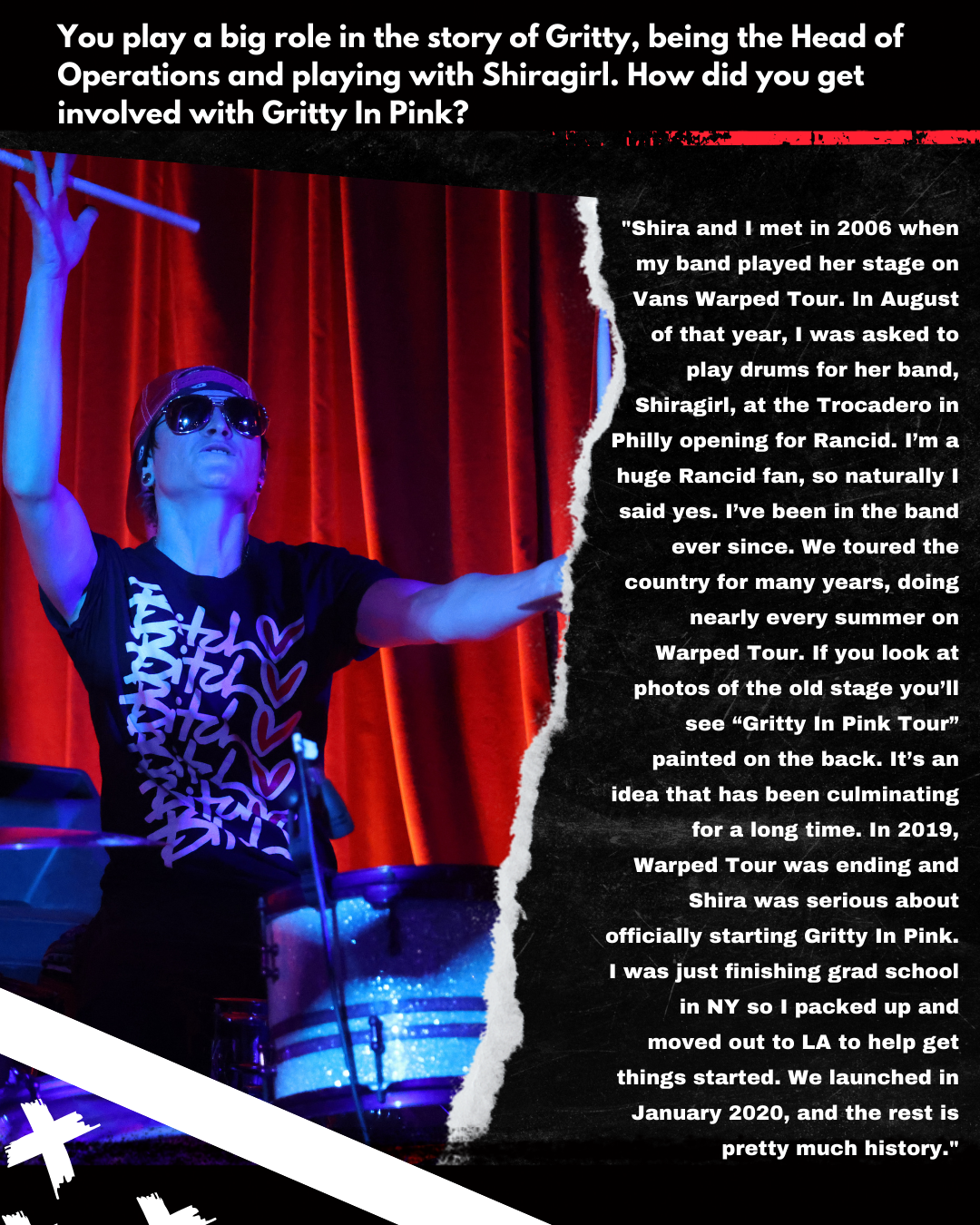 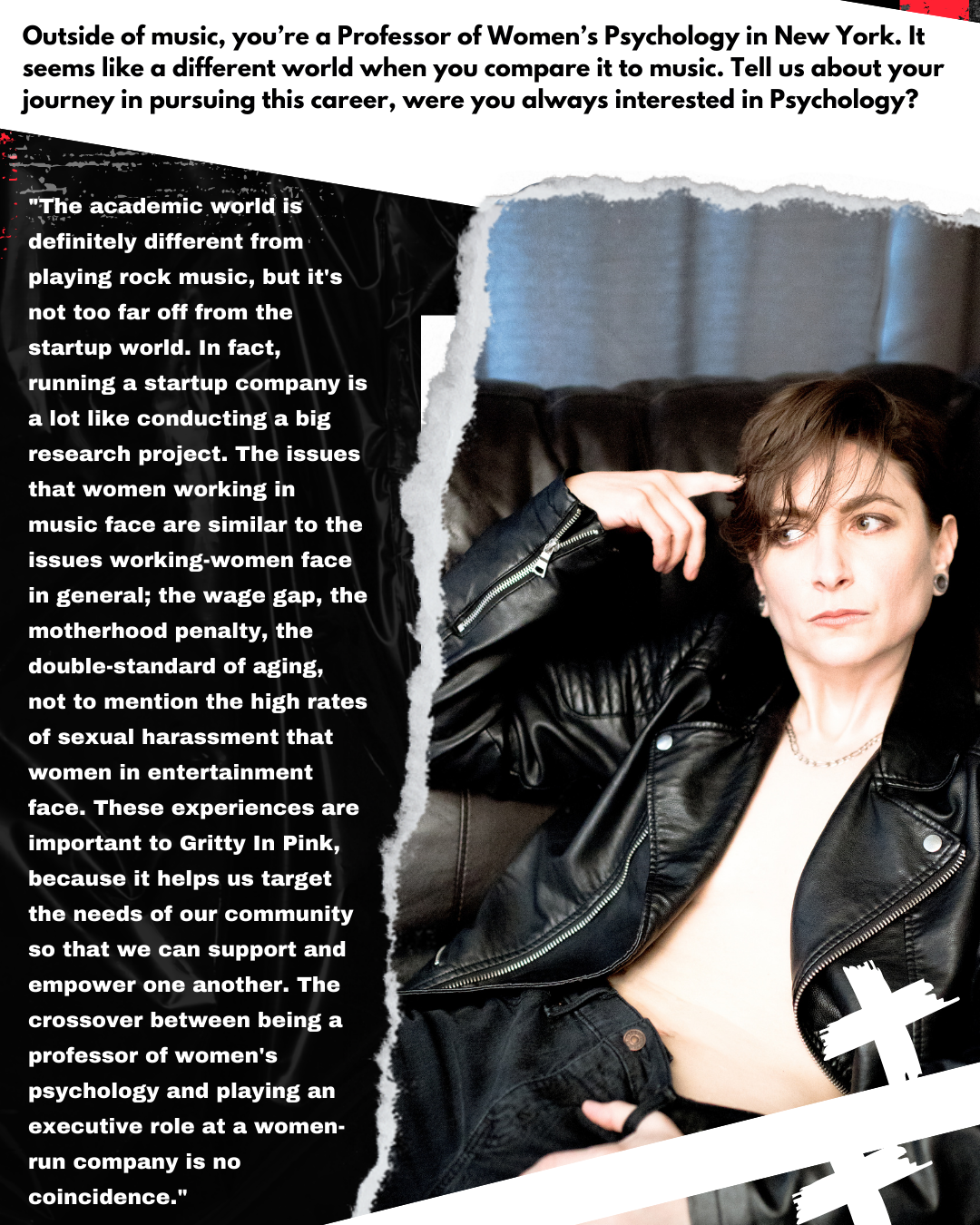 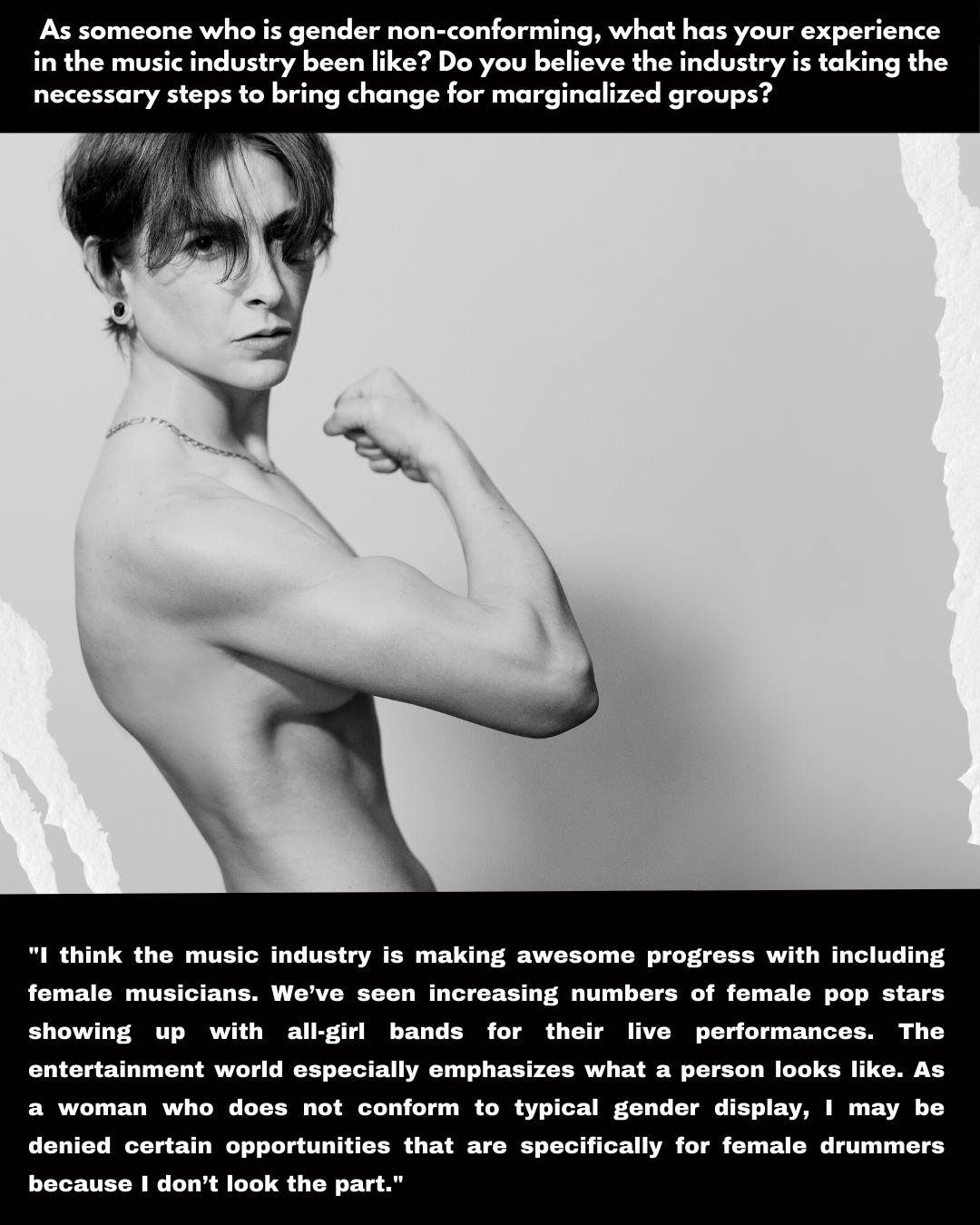 1.You play a big role in the story of Gritty, being the Head of Operations and playing with Shiragirl. How did you get involved with Gritty In Pink?
Shira and I met in 2006 when my band played her stage on Vans Warped Tour. In August of that year, I was asked to play drums for her band, Shiragirl, at the Trocadero in Philly opening for Rancid. I’m a huge Rancid fan, so naturally I said yes. I’ve been in the band ever since. We toured the country for many years, doing nearly every summer on Warped Tour. If you look at photos of the old stage you’ll see “Gritty In Pink Tour” painted on the back. It’s an idea that has been culminating for a long time. In 2019, Warped Tour was ending and Shira was serious about officially starting Gritty In Pink. I was just finishing grad school in NY so I packed up and moved out to LA to help get things started. We launched in January 2020, and the rest is pretty much history.
‍
2. How did you get your start playing the drums? Was it something you taught yourself or did you seek out musical guidance from your family? Do you remember the first song you learned how to play?
I started playing drums when I was 10 years old after I got a toy drum pad that I really liked. My mom sent me to drum lessons. I owe all my success as a drummer to my mom being a supportive parent. The first song I learned how to play was “she talks to angels” by The Black Crowes, haha.

3.Considering that the music industry is such a boy’s club, what’s it like being a part of bands that put women at the front?
It’s awesome. It's empowering. I would have it no other way.
‍
4. Outside of music, you’re a Professor of Women’s Psychology in New York. It seems like a different world when you compare it to music. Tell us about your journey in pursuing this career, were you always interested in Psychology?
The academic world is definitely different from playing rock music, but it's not too far off from the startup world. In fact, running a startup company is a lot like conducting a big research project. The issues that women working in music face are similar to the issues working-women face in general; the wage gap, the motherhood penalty, the double-standard of aging, not to mention the high rates of sexual harassment that women in entertainment face. These experiences are important to Gritty In Pink, because it helps us target the needs of our community so that we can support and empower one another. The crossover between being a professor of women's psychology and playing an executive role at a women-run company is no coincidence.

5. Do you find yourself using different drumming techniques when playing with other bands outside of Shiragirl? What’s your favorite technique to use?
When I first started working with a producer I was in a prog-metal band. When I started writing for Shiragirl it was mostly pop-punk. I can pretty much play anything.

6. Is there a band/artist you would love to play drums for on tour or a song?
Motley Crue

7. Dead or alive, who are your top 3 drummers and why?
Tre Cool really got me going as a kid when the Dookie album came out. Then Travis Barker joined Blink 182 and I was like yaass. Now, I’m playing Tommy Lee in the Motley Crue tribute, Red Hot, so he is my new spirit animal.

8. In your opinion, what makes a good drummer in a band?
Execution and showmanship. First and foremost, keep solid timing. Backbone of the band. Second, and what will ultimately set you apart, is not just how well you play but how well you perform.
‍
9. What’s your preferred drum equipment to play on when practicing? Are there any techniques you think every drummer should know?
As long as I have my sticks (Vic Firth American Classic Rock N) I can pretty much play on anything. I will break any other stick. Every drummer should know paradiddles haha.
‍
10. As someone who is gender non-conforming, what has your experience in the music industry been like? Do you believe the industry is taking the necessary steps to bring change for marginalized groups?
I think the music industry is making awesome progress with including female musicians. We’ve seen increasing numbers of female pop stars showing up with all-girl bands for their live performances. The entertainment world especially emphasizes what a person looks like. As a woman who does not conform to typical gender display, I may be denied certain opportunities that are specifically for female drummers because I don’t look the part.
‍
11. How would you title this chapter of your life?
Level Up.
‍
‍12. You bounce back-and-forth between New York and Los Angeles. How do you make that work?
Time freedom is very important to me. For most of what I do, all I need is my laptop and WiFi. Sometimes unpacking isn’t even an option and I’m literally living out of a suitcase. Maybe it's from all the years of touring the country with Shiragirl that it feels very natural to go from coast to coast. It does something for my soul.
‍
13. How can people continue to support women and other marginalized voices in music?
The consumer has the power. I don’t just mean paying money, but paying attention. The videos we watch, the companies we follow, the posts we share. When we give something our attention, we’re essentially supporting it. Take a critical look at what you’re paying attention to. Be mindful of inclusion and diversity. If we want to start seeing more of something, we must direct our attention towards it.