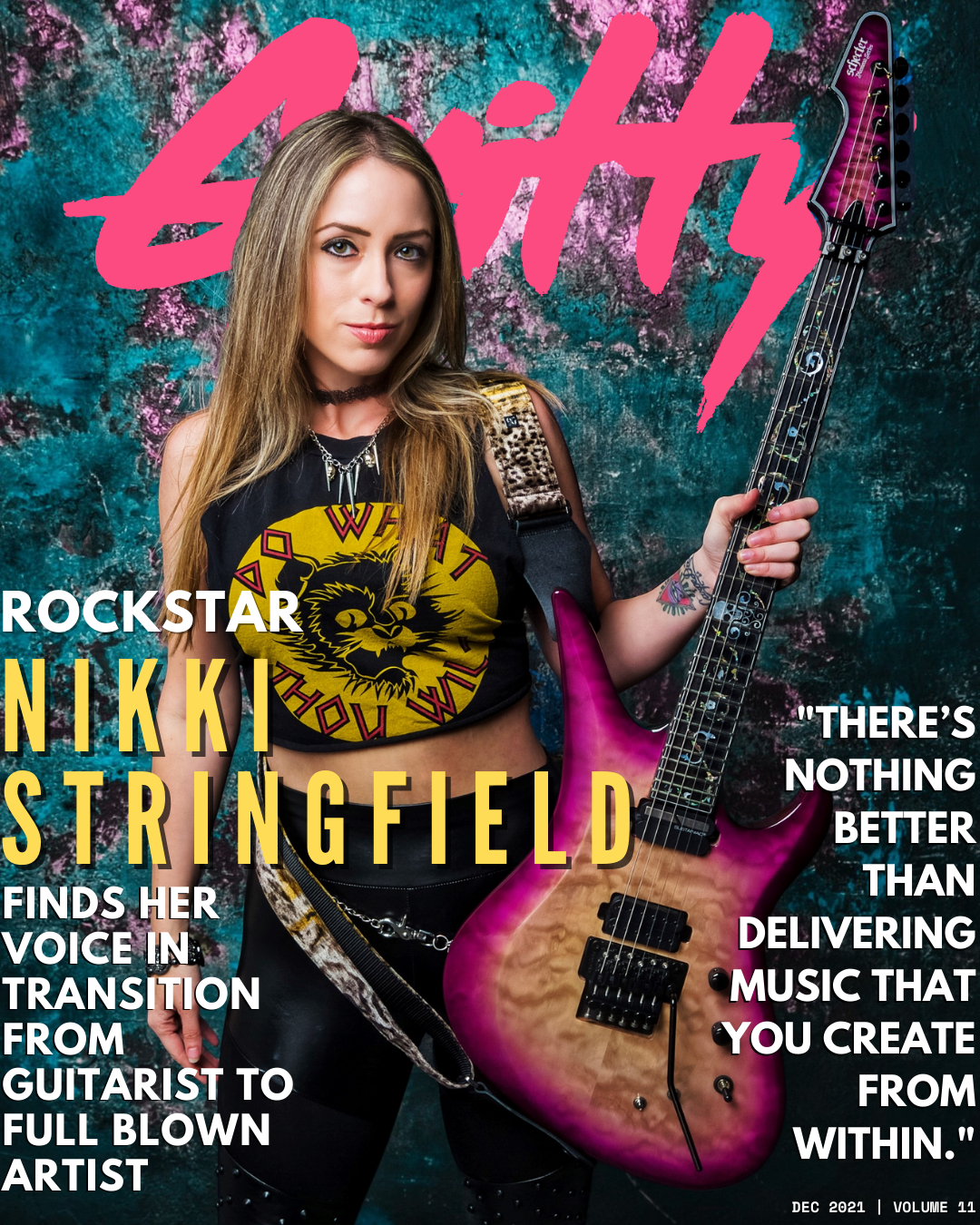 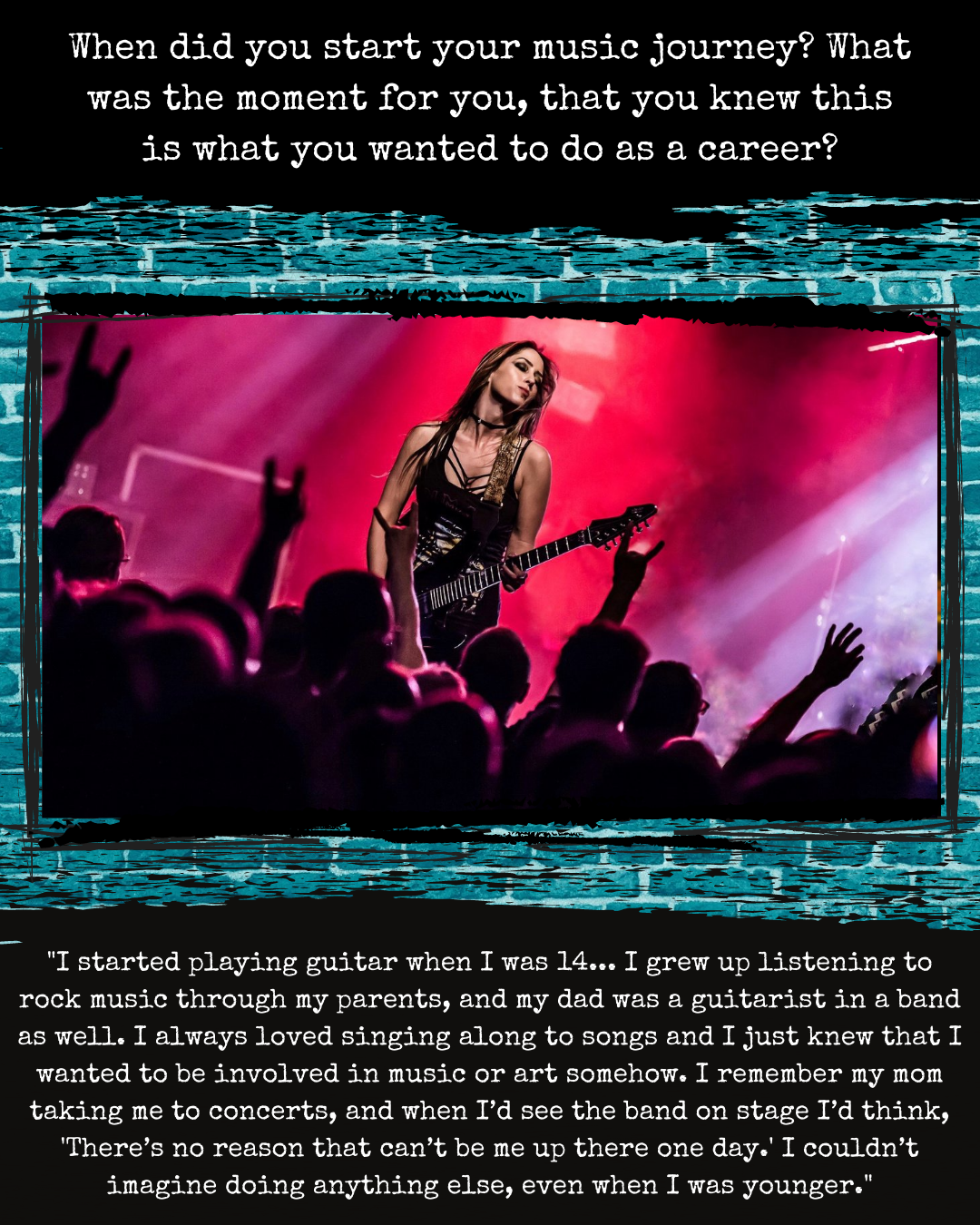 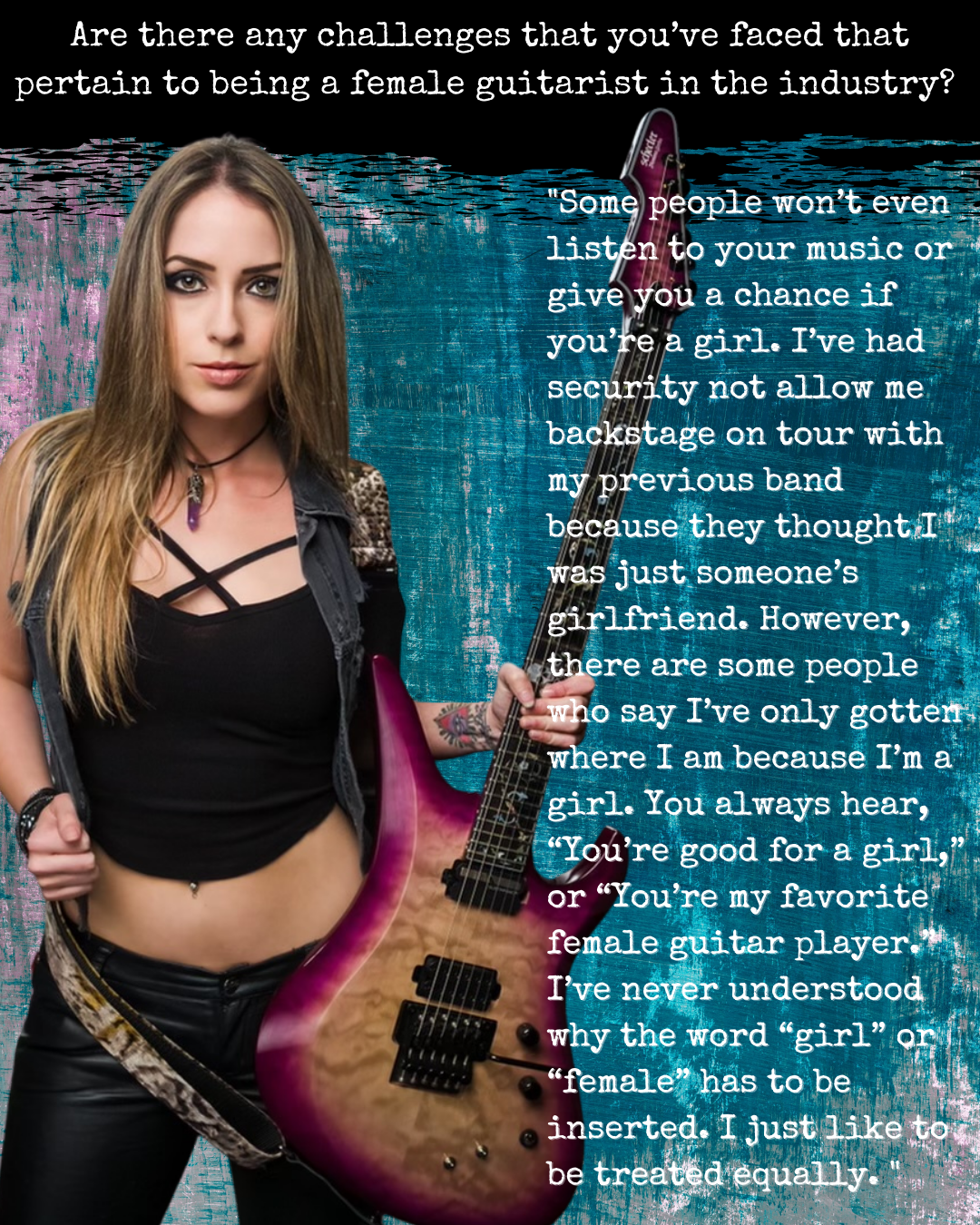 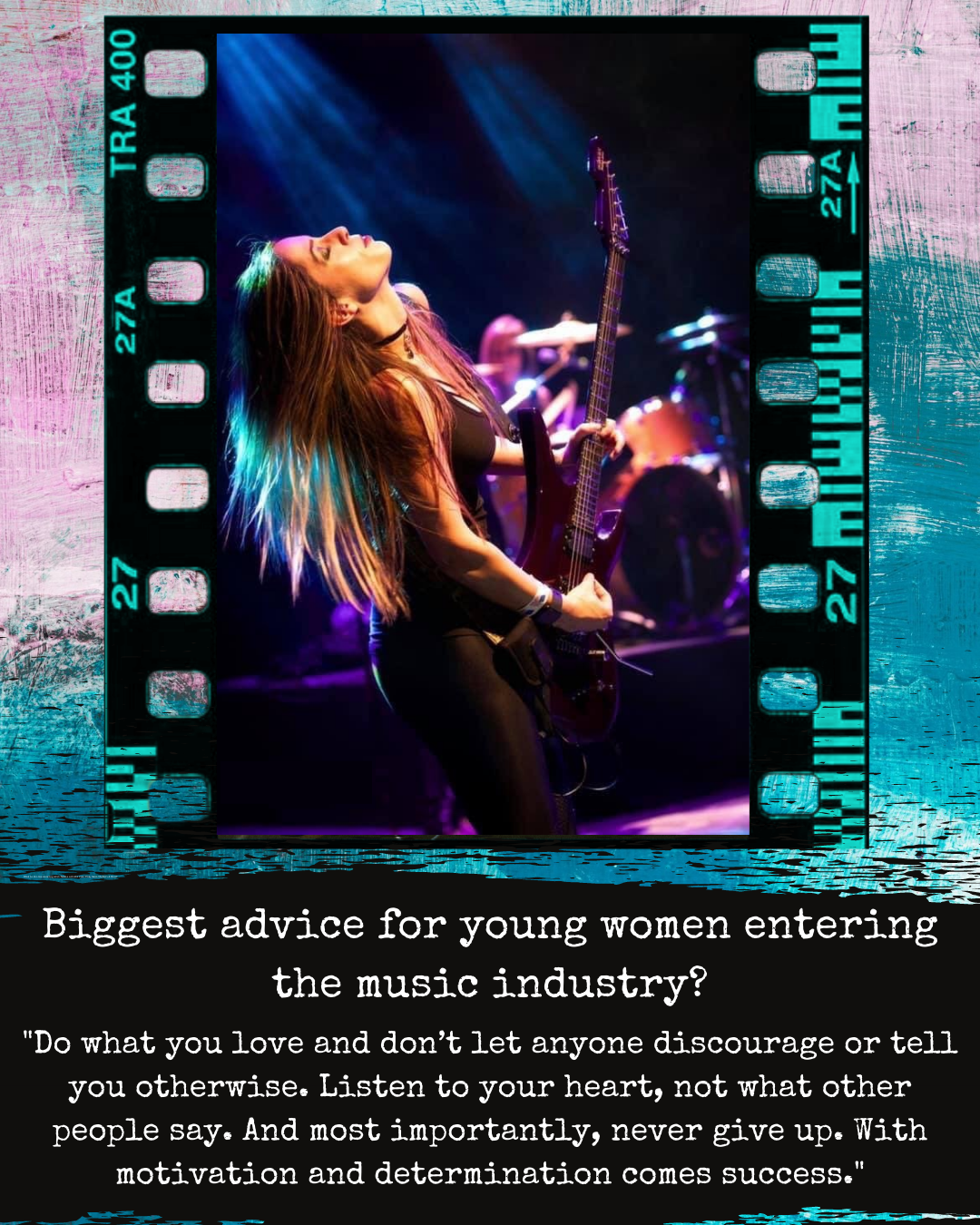 When did you start your music journey? What was the moment for you, that you knew this is what you wanted to do as a career?
"I started playing guitar when I was 14...  I grew up listening to rock music through my parents, and my dad was a guitarist in a band as well. I always loved singing along to songs and I just knew that I wanted to be involved in music or art somehow. I remember my mom taking me to concerts, and when I’d see the band on stage I’d think, 'There’s no reason that can’t be me up there one day.' I couldn’t imagine doing anything else, even when I was younger."
Who are your biggest musical inspirations?
"To narrow it down to a few, I’d say Nirvana, Avenged Sevenfold, Evanescence, Iron Maiden, and Pantera."
People know you for being the guitarist of The Iron Maidens and Heaven Below, what are some of your favorite songs to play from each band?
"For the Maidens, I’d have to say “Powerslave,” “The Clairvoyant,” and “Phantom of the Opera.” For Heaven Below, I’d say our cover of “We Will Rock You,” “Devilina and the Damage Done,” and “When Daylight Dies.” It’s so hard to choose!"
In 2019, you released your first EP Harmonies for the Haunted, how did you navigate finding your own sound as a solo artist?
"I have such a wide variety of influences, but I think it was pretty natural with finding my own sound. I really love harmonized guitar parts and of course guitar solos, but as I really focused on writing it became easier to make the songs sound more consistent with each other. I think finding my own voice and figuring out my vocal style was the biggest challenge since I’ve always been a guitarist.. this was my first venture into being a singer as well."
Since you’ve launched your solo career, how has the transition from band to solo been for you? Anything you’ve learned from being in a band that you keep in the back of your mind as a solo artist?
"There are pros and cons for sure. Most people just think of me as a guitarist in The Iron Maidens, and it takes a lot of effort to help them realize there’s so much more to me than that. I love playing with the Maidens, but there’s nothing better than delivering music that you create from within. Nothing can top that feeling. I’m so thankful that I’m able to be in different bands/projects and express myself creatively in a variety of ways. I’ve actually learned so much from Heaven Below that I carry over to my solo project.. everything from creating merch, recording, writing, etc. Since everything in the music industry is constantly evolving I feel like you’re always learning something new."
Earlier this year you announced that you’re working on a new album, when can we expect it?
"I am! I just finished up 11 demos and I’m hoping to have the album out in Spring of next year. It all depends on our touring schedules and how much time I have at home to work on it!"
Are there any challenges that you’ve faced that pertain to being a female guitarist in the industry?
"Once again, there are pros and cons here. Some people won’t even listen to your music or give you a chance if you’re a girl. I’ve had security not allow me backstage on tour with my previous band because they thought I was just someone’s girlfriend. However, there are some people who say I’ve only gotten where I am because I’m a girl. You always hear, “You’re good for a girl,” or “You’re my favorite female guitar player.” I’ve never understood why the word “girl” or  “female” has to be inserted. I just like to be treated equally."
Do you have a dream artist you would like to work with in the future?
"I think if I was able to collaborate with the guys from Avenged Sevenfold, that would be a childhood dream come true."
First concert you went to?
"Backstreet Boys! And I still love them."
If you could pick one album to be the soundtrack of your life, what would it be and why?
"I’m honestly not sure with this one! I tend to like music with darker lyrical content that doesn’t really match my life. I’ll have to think on this one!"
Any new female artists you’re currently listening to?
"I love Plush’s new album.. they absolutely rock!"
Favorite TV Show?
"Vikings, South Park, and Tales From The Crypt"
Most inspirational quote?
"Carpe Diem (Seize the Day)"
One word to describe yourself?
"Creative."
What’s your ideal day?
"Waking up, working out, working on music or playing a show.. as long as it’s productive it’s a good day. I do always love a relaxing day at the beach, though!"
Where do you see yourself in five years?
"I’d love to see myself touring with my original music with a few other albums."
Biggest advice for young women entering the music industry?
"Do what you love and don’t let anyone discourage or tell you otherwise. Listen to your heart, not what other people say. And most importantly, never give up. With motivation and determination comes success."
How did you get involved with Gritty In Pink?
"What does it feel like being a part of a community for women in music? I had first heard of Shira on Warped Tour, and then I saw Gritty In Pink on Instagram! I’m so happy to have found such an amazing and inspiring community for women in all types of music. It’s really a unique and wonderful thing."
Any final comments?
"Thanks so much for including me in this awesome community and please check out all the other amazing musicians on Gritty In Pink!"